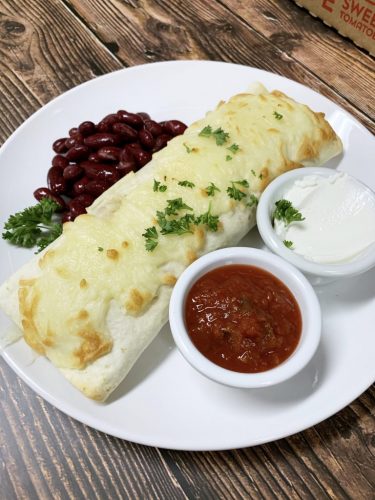 I guess it’s time.
If I’m ever gonna tell the enchilada story, seems now would be the time. This story’s been on my mind for years and I’ve shared pieces with a few people, but I’ve never really given the credit that is long overdue. It’s time I express my gratitude.

It’s the winter of ‘94. I’m fresh off a stint as an audio tech for CBS Sports at the Winter Olympics in Lillehammer, Norway, back in my beloved hometown and working at the Cock ‘n Bull with intent of taking over ownership. It’s Monday night and a group of locals had a drink or two and then told me they were going elsewhere for a meal and were planning on returning for an after dinner drink. That’s when it occurred to me, for the first time, that the 80’s were officially over. People were no longer willing to spend the time and, more importantly, the money to eat lobsters and filet mignon on a regular basis and this ‘special occasion’ place had better think about reinventing itself for survival.

The very next night, a Tuesday (still our closed night) I had dinner at my sister’s home. With her brand new Campbell Soup Cookbook on the counter she made us all a meal of chicken enchiladas. Quick, efficient and economical they were the perfect meal for a young mother to put together for family and guests.
And I came into this kitchen early the next morning with a plan that involved making an enchilada from scratch (sans canned soup) and starting a light menu. I nailed an old chalkboard to the bar wall and the new Pub Menu began with one item. On a Wednesday night in March we sold eleven Chicken Enchiladas. The next night, I roasted beef and added a French Dip to the menu. Then came burgers, nachos, Grosswiches, Barnwiches ‘n wings.
The game had changed for us. Families could now afford to dine here regularly. The Fire Chief could now grab a burger and still make a 7:00 meeting. The Wednesday night basketball players could grab a plate of wings with their post game pint. The enchilada changed the way this community looked at the Cock ‘n Bull. The light menu soon became, on average, 40 percent of the revenue generated in this business. The mighty enchilada had redefined and ultimately saved The Cock ‘n Bull.

So there ya go. The dinner my sister Vicki cooked was catalyst to the reincarnation and survival of this restaurant.

Sunday March 15, 2020 at 8 PM, Governor Andrew Cuomo closed, temporarily, all restaurants and taverns in the state as a measure to slow down the spread of Covid 19. We were closed, with the exception of take out service. Monday and Tuesday nights of that week we ran a takeout counter with very limited options. See, here’s the thing…we are not by design a takeout business. Our kitchen is not set up efficiently for that. Our menu is not set up for that either. We have very limited pantry and freezer space as we deal primarily in fresh and local supplies that we simply don’t stockpile. So the first couple of nights provided a bumpy flight. I decided that streamlining was necessary. We can survive this, and we can serve our community, if we focus on one or two items each night and focus on efficiency. Play to your strengths, ‘small ball’ every soccer coach would call it.
Wednesday night we were all prepped for a new approach to this new world. One item. Let’s nail it! Play your strongest hand.
I seared off a whole bunch of chicken thighs, caramelized a mountain of Spanish onions, added the sour cream, the seasonings and rolled up, at first, a single chicken enchilada. I put it on a plate, covered it with cheese, dusted it with freshly chopped parsley and fired it into the convection oven. When the cheese had melted and turned a golden brown I splashed my currently favorite hot sauce on it, looked it straight in the eye and said “OK, Champ, you’re up!”
We sold 62 enchiladas that Wednesday night.
Give the people what that want, right?!
So this past Wednesday we offered a family meal consisting of 4 enchiladas, rice and beans. 27 families opted in on it.
That’s a whole lotta enchilada!
Unfamiliar times we are in here and I really don’t know what the future holds for this, or any other, restaurant. I do know that the enchilada has a very special place in the history and evolution of this barn and I will refer to it going forward as “Champ”.
I’ll be making them again this Wednesday and every Wednesday that I’m fortunate enough to cook meals for hungry people, in a barn, in my hometown.
I have my sister to thank for this. Thanks, Vicki, for the mighty enchilada, Champ. And thank you to every one of you who have ever ordered one and helped keep the lights on here for 44 years. We’re not done yet…