George Harrison wrote “It’s been a long, cold, lonely winter”. I thought I heard the earth grumble and groan and begin to wake.  I thought I smelled the soil’s sweet nocturnal sweat seep into my sinuses. I thought I heard music on the lawn, laughter in the leaves.   I swear I heard crocuses crying for sunlight.  And I thought I smelled spring.  I walked a little further and stood at the stone wall, the property line set when Chuck and Don were still boys. I paused and thought of seasons past, tales told, risks, rewards, ruins, remains.  And I heard it.  I heard spring whisper.  Not in the song of a bird nor the babbling of a brook.  I heard not the crack of a bat nor a southern breeze. I heard a singular drip from the sugar maple. 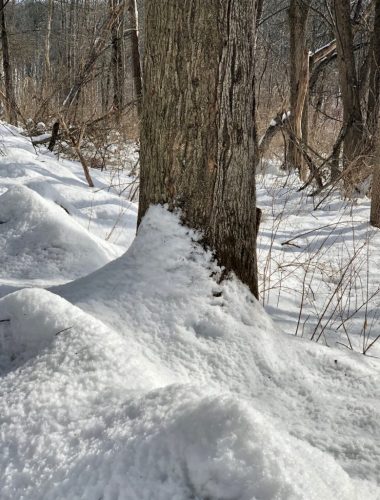 James Taylor wrote “the sap rises and the angels sigh”.   An eager drop hit the crusted snow and it began.  Like the first note of the first song of the first festival of spring.  We will be tapping trees, boiling sap, bathing in sweet sugar shack scents.   Awakening each and every sense.  Tasting whiskey, singing songs.  The dance is about to begin, my friend.  The smoker will be lit, the bows will be rosined.